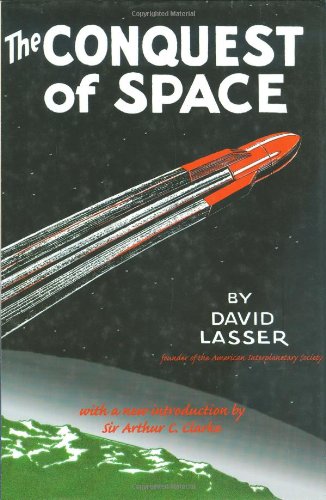 While searching my public library for Willy Ley’s famous book of the same name, I stumbled upon this one instead and checked it out on a whim. I had never heard of David Lasser, but the art deco cover was enough to pique my curiosity. It depicts a large, red rocket with long tail fins blasting itself beyond Earth’s atmosphere.  The image refers to Fritz Lang’s 1929 sci-fi epic (Frau im Mond), which was released in the U.S. a year later as By Rocket to the Moon. Yet the book’s relationship to science fiction goes far deeper. In his introduction to this new edition, Arthur C. Clarke describes his chance encounter with the first edition of this book at age 14 and credits it with launching his career.

Apart from the delightful cover, the first thing that struck me about the book was its extraordinary prescience, along with the withering scorn and ridicule heaped upon its author and his friends for their advocacy of interplanetary flight. Although widely dismissed at the time as a crank, Lasser had an engineering degree from MIT, and his scientific training is evident throughout the book. Of course there are some glaring errors, most of which are quaint and forgivable repetitions of the conventional scientific speculations of the day, but several passages suggest that Lasser did not fully appreciate that the sun and Earth are billions, not millions, of years old.  Nevertheless, his grasp of the physics of rocketry and celestial mechanics was superior to that of his most vocal academic critics, some of whom insisted a rocket could never work in space, because it would have nothing to push against. Lasser knew better and patiently explained to his readers why the rocket was not merely a feasible solution to the problem of space travel, but the only solution.

I was enthralled by his detailed descriptions of the experiments with liquid-fueled rockets being conducted during the interwar years, both in America and Germany, and of the cooperation between these two groups of experimenters and visionaries. Yet my fascination at the detailed drawing of the tiny German Mirak rocket was colored by visions — unknowable to Lasser — of its notorious descendant, the V-2, and of the great human suffering it would cause. But in 1931 the horrors of Nazism lay well in the future, and The Conquest of Space is less about conquest than about curiosity, exploration, invention, creativity, and the place of humanity in the cosmos. The tone of the book is overwhelmingly optimistic.

My favorite part was Lasser’s speculative fictional narrative of the first rocket trip to the moon in chapters 8 through 11. The gargantuan moon rocket he imagined, named Terra, weighed 10,000 tons and carried eighteen astronauts. By contrast, the Apollo 11/Saturn V that would fulfill Lasser’s vision 38 years later was about a third of that weight and accommodated only three. Astonishingly, however, both were three-stage rockets that used liquid hydrogen and liquid oxygen as fuel for their two upper stages.  The first stages of both also used liquid oxygen as the oxider, but the Saturn V’s first stage burned highly refined kerosene, whereas Terra’s burned alcohol.  These similarities, perhaps more than anything else in the book, reveal Lasser’s deep understanding of the physics and chemistry of a realizable trip to the moon.

The differences between Terra and the Apollo/Saturn V are equally fascinating. Although Lasser understood that gyroscopes could be used to stabilize a rocket, he did not foresee how effective this method could be at low speeds, especially when coupled with modern electronics and gimbaled rocket exhausts.  He therefore launched his Terra horizontally on a huge railroad that gradually curved skyward along the base of a mountain; liftoff came at a speed high enough for those impressive fins to stabilize the rocket. His description of the sensations of launch were spot-on, especially the noise and the stress of acceleration, although the terrifying sensation of falling his novice astronauts experience during their first moments of weightlessness was a bit overdone.  Terra’s crew compartment was likewise overdone, not only in its size (Do we really need a cook and two journalists aboard the first flight to the moon?), but also in various luxuries like a double hull to insulate the crew from the extreme temperature difference between the dark and sunlit sides (Apollo solved this simply by rotating), and heavy steel shoes for walking about the ship on its magnetized floor (Apollo was too cramped for walking).

More easily forgivable are Lasser’s assumption that radio communication with Earth would be impossible above the ionosphere (known in his day as the Kennelly-Heaviside layer), and his failure to foresee the advent of semiconductor electronics, the digital computer, and the utility of these in navigating to the moon. Instead he imagined a highly trained pilot upon whose navigational skills depended a successful journey and efficient consumption of fuel. In Lasser’s story this task is too much for the pilot on his first attempt, and by the time Terra is in lunar orbit, it will not have enough fuel to return to Earth if it attempts a lunar landing. Lasser used this plot twist to emphasize the great difficulty of a lunar landing, and rightly so, because he imagined landing the whole of Terra and its crew of 18. Had he foreseen the strategy of lunar-orbit-and-rendezvous used in Apollo, at least some of his astronauts might have made it to the lunar surface. But surely this is Lasser’s most forgivable shortcoming, considering that this strategy wasn’t even part of NASA’s planning until 1962.

So Terra’s first lunar mission was more like Apollo 8 than Apollo 11: it orbited the moon, without landing, and safely returned to Earth. The flight of Apollo 8 came at the height of the Cold War, the impetus of the space race.  In both of the competing nations, most rockets were for weapons, not spacecraft, and a frightful number were armed with nuclear bombs.  The enormity of atomic energy was known in Lasser’s time, and although no one knew how to release it in 1931, he speculated that it might someday be harnessed as a vastly more effective means of rocket propulsion.  He did not foresee the horrific instrument of mass death that is the modern ICBM, but he was no stranger to mass death.  He had fought in the Great War and was on the receiving end of chemical weapons during the Argonne offensive. He knew that the coming advances in rocketry would be turned to military purposes, but even with the mere conventional explosives he imagined atop them, he thought intercontinental missiles so deadly and unstoppable as to put an end to war. He wrote:

I have the rather naive belief that as soon as wars become as terrible as the rocket can make it, that war will cease, because then, I think, an organized opposition of the earth’s people will prohibit them.  [p189]

Naive, yes — regarding the imagined global pacifist movement — but also prescient, considering that we have not yet had a global nuclear war.  But Lasser’s optimistic take on humanity shines in a somewhat less naive way in his description of the popular reaction to Terra’s first lunar flight:

We learn that wild excitement prevails all over the globe. Cities have given way to unrestrained celebration, and the streets are filled with thousands of sky-gazers. The newspaper offices are constantly besieged for the latest scrap of information on our progress.

We cannot but feel now that this journey has served its purpose in the breaking down of racial jealousies. All nations have united in a communion of joy.  All the earth’s people share in the glory…  [p88]

This is not too far off the mark, considering that Neil Armstrong’s first step onto the moon had by far the largest television audience of all time, estimated at a fifth of the world’s population. As The Guardian recently put it,

It was about celebrating the wealthiest and most powerful nation the world has ever seen and the nature of its crowning achievement: not the conquest of another people, but the act of putting one of its own on another world.

But Lasser was exactly on target in his depiction of the rapture of Terra’s crew at their first sight of the whole Earth against the blackness of space:

We are silent before this spectacle. We are suspended motionless in an eternity of space and time. The silence of the dark spaces is so overpowering that we dare not move…

A great spiritual tranquility fills us — a humbleness and a yearning for the continuance of this immense peace. Our being seems spread through the eternity that we can see. We realize now the full meaning of Einstein’s “cosmic religion.” Cities, empires, states; dreams and ambitions; conflict and confusion are infinitely remote, part of the dream-world of that slowly turning globe. [p89]

Although they chose different words and a different religious reference, the astronauts of Apollo 8 said essentially the same thing in their message to the earth of Christmas eve, 1968.

As I write in early 2016, human exploration of the moon seems a distant memory, and our mutually exclusive religions breed more discord than unity.  If only we could all see each other and our Earth as David Lasser did in 1931, with his vivid and scientifically enriched imagination.

In addition to the minor flaws already mentioned, the book lacks an index and could benefit from some copyediting, but I still highly recommend it for its unique perspective and historical value. This new edition includes some supplementary letters, articles, and a brief biographical sketch of the author. It was immensely satisfying to read that Lasser lived to see not only the Apollo lunar landings, but also most of our initial reconnaissance of the solar system by robotic spacecraft.