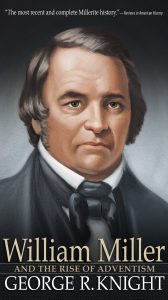 I’ve written much about the cultishness of president Trump’s followers, and I’m not alone in seeing them that way, but the election of 2020 will bring a new wrinkle to this story – new, at least, for Trumpists. For certain other cultists, however, it’s an old story.

On October 22, 1844, thousands of American Christians, known variously as “Adventists” or “Millerites”, gathered in anticipation of the second coming of Christ and their personal ascension into heaven on that very day. Their timing was based on a dating scheme worked out by their unconventional leader, William Miller, who extracted from the book of Daniel more than its author had put there. Other factors had also contributed to Miller’s apocalypticism, not least the great and terrifying Leonids meteor storm of 1833, which he took as fulfillment of the prophecies in Matthew 24:29 and Revelation 6:13. But the Leonids were only particles of dust left in the wake of comet Tempel-Tuttle, and the allegorical span of time prophesied in Daniel did not, as it turned out, foretell the arrival of Jesus on any day in 1844.

Instead the event would be remembered as the Great Disappointment. It shattered Miller’s movement and the fondest hopes of its adherents. Some left the fold, returning to more conventional churches or, in a few cases, giving up on religion altogether; some went to other prominent cults, like the Shakers; but many tried desperately to cling to their Adventist dogma. Competing narratives arose within the Millerite congregation, alternative explanations of what had gone wrong in Miller’s reasoning. Each of these attracted adherents, and the group fragmented into multiple sects that shared theological traces of their common ancestry but with different ideas about dating the apocalypse. The descendant sects include the Jehovah’s Witnesses, Advent Christian Church, Seventh Day Adventists, the infamous Branch Davidian cult of David Koresh, and remnants of the recently-splintered Worldwide Church of God.

The lesson of the Great Disappointment is that attachment to a cult is fiercely strong, even in the face of blatantly disconfirming evidence. Rather than accept the possibility that their beliefs are false, adherents are more likely to rationalize away the disconfirming evidence and hold fast to their beliefs. Elsewhere I have argued that the power of cults has its roots in human sociobiology, and that the same applies to cultish political movements like the one that propelled Donald Trump to the presidency in 2016.

But biology is not the whole story; there are also cultural factors behind the Trump phenomenon. Chief among these is Fox News, a media venture that successfully captured a large and previously neglected market by telling politically conservative viewers what they want to hear, whether it’s true or not. In the age of Trump, it has degenerated into little more than American state television, a propaganda machine for the president that echoes whatever alternate version of reality he wants his followers to believe. Thus about a third of American adults believe the president did nothing wrong in the Ukraine scandal, follow his example in refusing to wear masks during the Covid-19 pandemic, and believe he will win re-election in a landslide unless Democrats steal the election through fraud.

Meanwhile one credible source, the conservative Economist magazine, estimates Trump’s chances of winning re-election at about 3%. Three percent is not zero, so there is still a real chance that Trump could win. But a Biden victory is far more likely, and worried observers like David Brooks wonder how Trump’s followers will react to a shocking collision with reality. Will they be content merely to rationalize, or will they take to the streets to reclaim America from the cheating Democrats who populate their alternate reality? The boarded-up storefronts in American cities suggest widespread fear of the latter.

The history of the Great Disappointment suggests some justification for that fear, though the disappointed Millerites were more the victims of mob violence than its perpetrators. The Trump cult, however, has a different kind of leader.

And what if Joe Biden wins the popular vote by an even greater margin than Clinton in 2016, yet loses the electoral college? After months of mass demonstrations against racial injustice, how many will fill the streets with rage against electoral injustice?

We could have avoided this precipice with meaningful electoral reform, and maybe someday we will. For now I hope moderation will prevail, but I don’t know what will happen: I write these lines on election day before the polls have closed. I only know that some large fraction of our citizens will soon experience a great disappointment.

2 Comments on “The Great Disappointment”